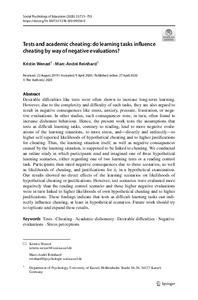 Desirable difficulties like tests were often shown to increase long-term learning. However, due to the complexity and difficulty of such tasks, they are also argued to result in negative consequences like stress, anxiety, pressure, frustration, or negative evaluations. In other studies, such consequences were, in turn, often found to increase dishonest behaviour. Hence, the present work tests the assumptions that tests as difficult learning tasks, contrary to reading, lead to more negative evaluations of the learning situations, to more stress, and—directly and indirectly—to higher self-reported likelihoods of hypothetical cheating and to higher justifications for cheating. Thus, the learning situation itself, as well as negative consequences caused by the learning situation, is supposed to be linked to cheating. We conducted an online study in which participants read and imagined one of three hypothetical learning scenarios, either regarding one of two learning tests or a reading control task. Participants then rated negative consequences due to these scenarios, as well as likelihoods of cheating, and justifications for it, in a hypothetical examination. Our results showed no direct effects of the learning scenarios on likelihoods of hypothetical cheating or justifications. However, test scenarios were evaluated more negatively than the reading control scenario and these higher negative evaluations were in turn linked to higher likelihoods of own hypothetical cheating and to higher justifications. These findings indicate that tests as difficult learning tasks can indirectly influence cheating, at least in hypothetical scenarios. Future work should try to replicate and expand these results.