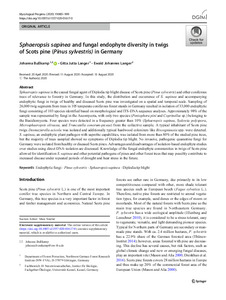 Sphaeropsis sapinea is the causal fungal agent of Diplodia tip blight disease of Scots pine (Pinus sylvestris) and other coniferous trees of relevance to forestry in Germany. In this study, the distribution and occurrence of S. sapinea and accompanying endophytic fungi in twigs of healthy and diseased Scots pine was investigated on a spatial and temporal scale. Sampling of 26,000 twig segments from trees in 105 temperate coniferous forest stands in Germany resulted in isolation of 33,000 endophytic fungi consisting of 103 species identified based on morphological and ITS-DNA sequence analyses. Approximately 98% of the sample was represented by fungi in the Ascomycota, with only two species (Peniophora pini and Coprinellus sp.) belonging to the Basidiomycota. Four species were detected in a frequency greater than 10% (Sphaeropsis sapinea, Sydowia polyspora, Microsphaeropsis olivacea, and Truncatella conorum-piceae) from the collective sample. A typical inhabitant of Scots pine twigs Desmazierella acicola was isolated and additionally typical hardwood colonizers like Biscogniauxia spp. were detected. S. sapinea, an endophytic plant pathogen with saprobic capabilities, was isolated from more than 80% of the studied pine trees, but the majority of trees sampled showed no symptoms of Diplodia tip blight. No invasive, pathogenic quarantine fungi for Germany were isolated from healthy or diseased Scots pines. Advantages and disadvantages of isolation-based endophyte studies over studies using direct DNA-isolation are discussed. Knowledge of the fungal endophyte communities in twigs of Scots pine allowed for identification S. sapinea and other potential pathogens of pines and other forest trees that may possibly contribute to increased disease under repeated periods of drought and heat stress in the future.