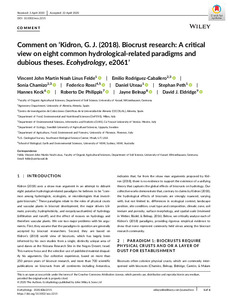 Kidron (2018) uses a straw man argument in an attempt to debunk eight putative hydrological‐related paradigms he believes to be “common among hydrologists, ecologists, or microbiologists that investigate biocrusts.” These paradigms relate to the roles of physical crusts and vascular plants in biocrust development, the major drivers (climate, porosity, hydrophobicity, and exopolysaccharides) of hydrology (infiltration and runoff), and the effect of mosses on hydrology and therefore vascular plants. We see two major problems with his arguments. First, they assume that the paradigms in question are generally accepted by biocrust researchers. Second, they are based on Kidron's (2018) world view of biocrusts, which has largely been informed by his own studies from a single, distinctly unique area of sand dunes at the Nizzana Research Site in the Negev Desert, Israel.