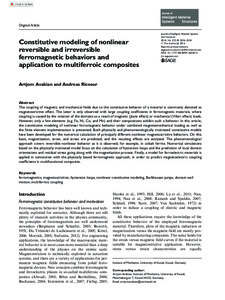 The coupling of magnetic and mechanical fields due to the constitutive behavior of a material is commonly denoted as magnetostrictive effect. The latter is only observed with large coupling coefficients in ferromagnetic materials, where coupling is caused by the rotation of the domains as a result of magnetic (Joule effect) or mechanical (Villari effect) loads.
However, only a few elements (e.g. Fe, Ni, Co, and Mn) and their compositions exhibit such a behavior. In this article, the constitutive modeling of nonlinear ferromagnetic behavior under combined magnetomechanical loading as well as the finite element implementation is presented. Both physically and phenomenologically motivated constitutive models have been developed for the numerical calculation of principally different nonlinear magnetostrictive behaviors. On this basis, magnetization, strain, and stress are predicted, and the resulting effects are analyzed. The phenomeno-logical approach covers reversible nonlinear behavior as it is observed, for example, in cobalt ferrite. Numerical simulations based on the physically motivated model focus on the calculation of hysteresis loops and the prediction of local domain orientations and residual stress going along with the magnetization process. Finally, a model for ferroelectric materials is applied in connection with the physically based ferromagnetic approach, in order to predict magnetoelectric coupling coefficients in multifunctional composite.