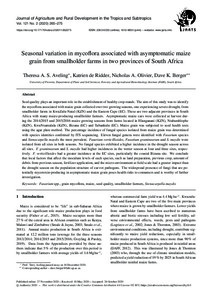 Seed quality plays an important role in the establishment of healthy crop stands. The aim of this study was to identify the mycoflora associated with maize grain collected over two growing seasons, one experiencing severe drought, from small-holder farms across KwaZulu-Natal (KZN) and the Eastern Cape (EC), two important provinces with maize producing small-holder farmers in South Africa. Asymptomatic maize ears were collected at harvest during two maize growing seasons from farms located in Hlanganani (KZN), Ntabamhlophe (KZN), KwaNxamalala (KZN), Bizana (EC) and Tabankulu (EC). Maize grain was subjected to seed health tests using the agar plate method. The percentage incidence of fungal species isolated from maize grain was determined with species identities confirmed by ITS sequencing. Nine fungal genera were identified with Fusarium species and Stenocarpella maydis the most prevalent. Fusarium verticillioides, Fusarium graminearum and S. maydis were isolated from all sites in both seasons. No fungal species exhibited a higher incidence in the drought season across all sites. F. graminearum and S. maydis had higher incidences in the wetter season at four and three sites, respectively. F. verticillioides had a greater incidence at the EC sites, particularly the coastal Bizana site. We conclude that local factors have a greater impact than the drought season on the population structure of ear-rot pathogens. The widespread presence of fungi that are potentially mycotoxin-producing in asymptomatic maize grain poses health risks to consumers and is worthy of further investigation.