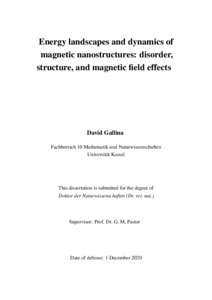 The static and dynamic magnetic properties of two-dimensional ensembles of dipole-coupled magnetic nanoparticles (NPs) are investigated from a theoretical perspective. Particular emphasis is put on the correlations between the geometrical arrangements of the NPs, their inherent structural disorder, and the cooperative magnetic dynamics of the nanostructures as a whole. To this aim a significant number of representative two-dimensional NP ensembles with different structural geometries and degrees of disorder are considered. The interaction- energy landscapes (ELs) of the ensembles are characterized and analyzed systematically by calculating the local minima and connecting first-order saddle points and by deriving the corresponding disconnectivity graphs and kinetic networks. In this way, a microscopic understanding of the dominant relaxation processes, their interrelations and the resulting dynamics is achieved.
The study shows that the topology of the ELs changes as a function of disorder in a most profound way. Weakly disordered square and triangular ensembles are found to be good structure seekers with a relaxation dynamics that is funnelled towards the ground state. In contrast, the ELs of strongly disordered ensembles are very rough, with a much larger number of low-energy local minima, which are separated by large energy barriers that tend to increase as the energy of the metastable states decreases. Furthermore, the study shows that the transition from weak to strong disorder has a drastic impact on the stochastic Markovian dynamics. While the relaxation dynamics in weakly disordered square and triangular ensembles follows a stretched exponential law with a single characteristic time scale, strongly disordered ensembles show a much more intricate dynamics that includes nontrivial phenomena such as multiple time scales, trapping and possibly ergodicity breaking.
The consequences of applying external magnetic fields on the cooperative magnetic behavior of NP ensembles and the role of the structural arrangement and disorder on the magnetic-field response of the nanostructures are determined. The anisotropy of the field- induced changes in the dominant magnetic configurations and in the interaction-energy landscapes are quantified. One observes that weakly disordered square and triangular ensembles remain good structure seekers as the external magnetic field is increased, whereas strongly disordered ensembles show a transition from bad to good structure-seeking behavior.
Furthermore, it is shown how the different ensemble geometries can be distinguished on the basis of the experimentally accessible hysteresis loops. For example, square ensembles have wasp-waisted hysteresis loops with a small remanence and a small coercivity, triangular ensembles have pot-belly-shaped loops with a large remanence and a small coercivity, and random ensembles have step-like loops with a large remanence and a large coercivity.
The correlation between nanostructure geometry and collective behavior is understood in further detail by showing how different NP arrangements have very different EL topologies, even if the degree of structural disorder remains small. NP ensembles arranged on lattices with a high rotational symmetry, such as square, triangular, and honeycomb lattices, are found to be very good structure seekers with fast and unhindered relaxation dynamics. In contrast, ensembles with more complex or less symmetric underlying geometries, such as kagome, rectangular, and orthorhombic lattices, show significantly rougher energy landscapes with larger energy barriers and slower dynamics. Especially the results on the kagome lattice demonstrate that geometric frustrations have a major impact on the ELs of nanostructures, which is as important as the frustrations resulting from strong structural disorder.
The goals and limitations of harmonic transition-state theory (HTST) in the context of magnetic systems are investigated by considering a small magnetic NP with cubic magne- tocrystalline anisotropy. The transition rates obtained from HTST are compared with the ones obtained from propagating the Landau-Lifshitz-Gilbert equation. The calculations indicate that HTST provides a good approximation of the transition rates at low temperatures and for large values of the Gilbert damping parameter. In addition, it is demonstrated that HTST breaks down in the small damping regime as a result of dissipative effects, recrossing trajectories, and multi-barrier transitions.
The dissertation is concluded by pointing out some of the possible extensions of this work and its implications for current open problems.