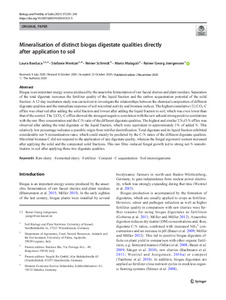 Biogas is an important energy source produced by the anaerobic fermentation of raw faecal slurries and plant residues. Separation of the total digestate increases the fertilizer quality of the liquid fraction and the carbon sequestration potential of the solid fraction. A 12-day incubation study was carried out to investigate the relationships between the chemical composition of different digestate qualities and the immediate response of soil microbial activity and biomass indices. The highest cumulative (Σ) CO2-C efflux was observed after adding the solid fraction and lowest after adding the liquid fraction to soil, which was even lower than that of the control. The ΣCO2-C efflux showed the strongest negative correlation with the raw ash and strong positive correlations with the raw fibre concentration and the C/N ratio of the different digestate qualities. The highest and similar ΣN2O-N efflux was observed after adding the total digestate or the liquid fraction, which were equivalent to approximately 1% of added N. This relatively low percentage indicates a possible origin from nitrifier denitrification. Total digestate and its liquid fraction exhibited considerable net-N mineralisation rates, which could mainly be predicted by the C/N ratios of the different digestate qualities. Microbial biomass C did not respond to the application of any digestate quality, whereas the fungal ergosterol content increased after applying the solid and the composted solid fractions. This raw fibre–induced fungal growth led to strong net-N immobilisation in soil after applying these two digestate qualities.