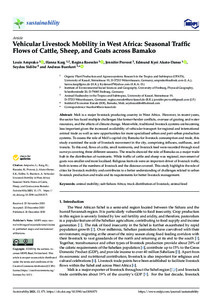 Mali is a major livestock producing country in West Africa. However, in recent years, the sector has faced multiple challenges like farmer-herder conflicts, overuse of grazing and water resources, and the effects of climate change. Meanwhile, traditional livestock systems are becoming less important given the increased availability of vehicular transport for regional and international animal trade as well as new opportunities for more specialised urban and peri-urban production systems. To assess the role of Mali’s capital city Bamako for livestock consumption and trade, this study examined the scale of livestock movement in the city, comprising influxes, outfluxes, and transits. To this end, flows of cattle, small ruminants, and livestock feed were recorded through road surveys covering three different seasons. The results showed the role of Bamako as a major trade hub in the distribution of ruminants. While traffic of cattle and sheep was regional, movement of goats was smaller and more localised. Religious festivals were an important driver of livestock traffic, both in terms of the numbers of livestock and the distance covered. This study highlights the role of cities for livestock mobility and contributes to a better understanding of challenges related to urban livestock production and trade and its requirements for better livestock management.