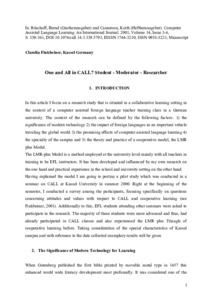 One and All in CALL? Learner–Moderator–Researcher

(One and All in CALL? Student - Moderator - Researcher)

In this article I will present the results of a research project on CALL and on cooperative learning in CALL, conducted as a democratic joint venture between teachers and students in the university setting over the last couple of years. The project consists of several sub-studies, all of which deal with the three-folded perspective I consider as most crucial for 21st century students: learning, moderating, doing research. This is particularly true for those students who have decided and who are willing to commit themselves into the endeavor of a life-long and never-ending learning and training process in order to, in the near future, become and, in the more distant future, be a ‘good’ teacher.
I believe that CALL will be one of the most important factors in that scenario that I will describe for schools set for the 21st century. In order to familiarize the reader with our teaching philosophy and beliefs, and to make clear what I consider a ‘good’ teaching and learning scenario, I will first show how the goal of teacher professionalization can be implemented into a university foreign language teacher training program. This can be done with strong reference to the ideas incorporated into a CALL model as well as a 21st century teacher competencies model. Both models can be regarded as ‘mergers’ implemented into the LMR-plus-Model of Foreign Language Teaching to the benefit of their users. In a second step I will describe the experiences made and data collected in the past few years in the CALL and LMR-plus field. The data presented here are part of a large in-process study based on the paradigms of action research. The project consists of several sub studies. The data are both of a quantitative and qualitative kind. Data will be quoted with reference to different kinds of populations. The study was conducted in a seminar on CALL (in-group) at the University of Kassel in summer 2000 and parallel to this outside the CALL classroom (out-group). In the course of the semester, I conducted a survey among the seminar's participants, focusing specifically on the impact of the LMR-plus triangle in combination with computer skills and experiences. The model regards each participant of the CALL-classroom, as well as any other classroom, as one and all: learner, moderator, researcher. This in turn supports the idea of life-long learning, which of course represents a substantial necessity of CALL, since technological development surely has not reached its peak yet. Consequently, the goals of the survey are to find out:
• about the students prior experiences, prior knowledge, attitudes, beliefs and interest as far as CALL and the LMR-plus model are concerned;
• whether CALL can contribute to a change in students’ computer skills;
• whether CALL conducted in a setting following the LMR-plus model can contribute to an awareness of the different roles the term professionalization implies;
• if the established competencies raise students urgent wish to put the LMR-plus model’s theory into practice in their present and future life as teachers