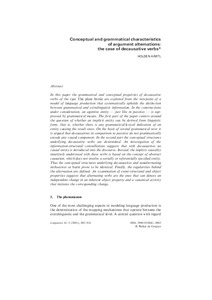 Conceptual and grammatical characteristics of argument alternations: the case of decausative verbs

In this paper the grammatical and conceptual properties of decausative verbs of the type The plate broke are explored from the viewpoint of a model of language production that systematically upholds the distinction between grammatical and extralinguistic information. In the constructions under consideration, an agentive entity — just like in passives — is suppressed by grammatical means. The first part of the paper centers around the question of whether an implicit entity can be derived from linguistic form, that is, whether there is any grammatical/lexical indication of an entity causing the result state. On the basis of several grammatical tests it is argued that decausatives in comparison to passives do not grammatically encode any causal component. In the second part the conceptual structures underlying decausative verbs are determined. An investigation of the information-structural constellations suggests that with decausatives no causal entity is introduced into the discourse. Instead, the implicit causality intuitively understood with these verbs is based on the concept of abstract causation, which does not involve a sortally or referentially specified entity. Thus the conceptual structures underlying decausatives and nonalternating inchoatives as burst prove to be identical. Finally, the regularities behind the alternation are defined. An examination of event-structural and object properties suggests that alternating verbs are the ones that can denote an independent change in an inherent object property and a canonical activity that initiates the corresponding change.