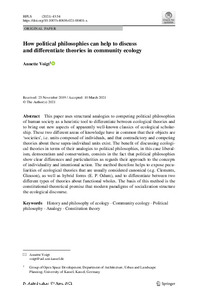 This paper uses structural analogies to competing political philosophies of human society as a heuristic tool to differentiate between ecological theories and to bring out new aspects of apparently well-known classics of ecological scholarship. These two different areas of knowledge have in common that their objects are ‘societies’, i.e. units composed of individuals, and that contradictory and competing theories about these supra-individual units exist. The benefit of discussing ecological theories in terms of their analogies to political philosophies, in this case liberalism, democratism and conservatism, consists in the fact that political philosophies show clear differences and particularities as regards their approach to the concepts of individuality and intentional action. The method therefore helps to expose peculiarities of ecological theories that are usually considered canonical (e.g. Clements, Gleason), as well as hybrid forms (E. P. Odum), and to differentiate between two different types of theories about functional wholes. The basis of this method is the constitutional-theoretical premise that modern paradigms of socialization structure the ecological discourse.