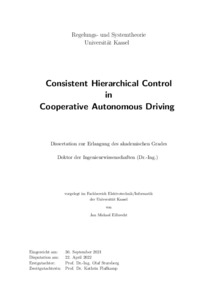 This thesis is set within the context of the problem of motion planning in autonomous driving. Due to nonlinear system dynamics and non-convex constraints, this problem is challenging even under simplifying assumptions (e.g. non-cooperating traffic participants obey traffic rules, lossless inter-vehicle communication, absence of measuring errors). Typical solution approaches rely on a decomposition of the problem into subproblems which are easier to solve. This decomposition often results in a hierarchy of subproblems which are to be solved sequentially, where succeeding problems rely on the solution of preceding ones, such that dependencies between subproblems exist. Existing procedures for the design of such approaches have in common that these dependencies are not accounted for by the solution methodology. This can lead to situations where succeeding problems cannot be solved due to unsuitable solutions of preceeding subproblems.

This thesis presents a design methodology which is able to account for such dependencies in a hierarchical solution approach. The methodology is developed under the assumption of a three-layer hierarchical solution approach comprising trajectory planning, tracking control, and a high-level controller which is to determine cooperating groups and their actions. While the major focus of the thesis is on hierarchical consistency, i.e., safe interaction of the framework's layers, computational efficiency is also a main concern.

The basis of the planning problem is its formulation as a mixed-integer optimization problem, whose globally optimal solution guarantees constraint compliance. This approach uses predictions of future values and conducts the optimization frequently anew in the spirit of receding horizon control in order to limit the impact of uncertainty.

The so-called maneuver concept is introduced in order to improve computational efficiency by exploiting structure in on-road traffic. A maneuver characterizes a set of qualitatively similar trajectories of a group of vehicles and is modeled as a hybrid automaton. This allows to compute controllable sets, containing initial states for which a maneuver can be executed. Given these, the high-level controller can assess the feasibility of many different options without computing plans when choosing the most promising one. Approximative set computations allow for both the application to typically high-dimensional state spaces in cooperative autonomous driving and for the approximation of solutions to the planning problem. Thus, no optimization is required online, which reduces computation times.

As vehicles often fail to perfectly follow a reference trajectory, safety margins to obstacles must be provided during planning. Safe interaction between planning and tracking layer then requires to only plan trajectories for which the maximum tracking error does not violate the pre-defined safety margins. The maximum error is determined based on computation of an invariant set of the tracking error dynamics, accounting for a set of possible reference trajectories, constraints on states and inputs, and uncertainty in a vehicle's tire model. This step is only carried out during offline design, while online operation of the tracking controller only requires computationally efficient algebraic operations. Both theoretical results and numerical simulations demonstrate the efficacy of the framework.