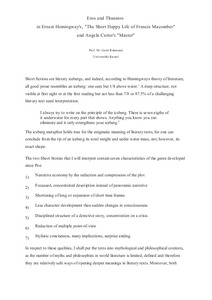 According to Hemingway all good prose has the dignity and draught of an iceberg. This is especially true of Hemingway's short stories.
"Francis Macomber" counts among the best composed short stories in English. Interpretation sways between Hemingway's idealisation of the male code and its deconstruction. Is the White Hunter a British scourge of American values or is Margot the tragic victim of a newly founded male friendship? Is the open ending rather a hunting accident or the mean murder of an unloved spouse? Hemingway gives hitherto uninterpreted clues by mentioning strategies of big game hunting and ballistics.
Carter's magic story "Master"; deals with the regression of a White Hunter who has become 'his own negative'. An Englishman dissolves into the Amazonian jungle and is killed by his own victim. The story can be read as a macabre crime of sexuality and murder or as a dystopian warning of the future of mankind if we go on exploiting and destroying our planet.