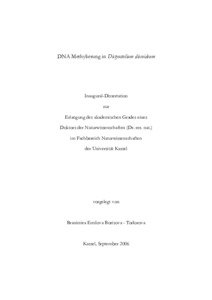 DNA methyltransferases of type Dnmt2 are a highly conserved protein family with enigmatic function. The aim of this work was to characterize DnmA, the Dnmt2 methyltransferase in Dictyostelium discoideum, and further to investigate its implication in DNA methylation and transcriptional gene silencing.
The genome of the social amoeba Dictyostelium encodes DnmA as the sole DNA methyltransferase. The enzyme bears all ten characteristic DNA methyltransferase motifs in its catalytic domain. The DnmA mRNA was found by RT-PCR to be expressed during vegetative growth and down regulated during development. Investigations using fluorescence microscopy showed that both DnmA-myc and DnmA-GFP fusions predominantly localised to the nucleus.
The function of DnmA remained initially unclear, but later experiment revealed that the enzyme is an active DNA methyltransferase responsible for all DNA (cytosine) methylation in Dictyostelium.
Neither in gel retardation assays, nor by the yeast two hybrid system, clues on the functionality of DnmA could be obtained. However, immunological detection of the methylation mark with an α - 5mC antibody gave initial evidence that the DNA of Dictyostelium was methylated. Furthermore, addition of 5-aza-cytidine as demethylating agent to the Dictyostelium medium and subsequent in vitro incubation of the DNA isolated from these cells with recombinant DnmA showed that the enzyme binds slightly better to this target DNA.
In order to investigate further the function of the protein, a gene knock-out for dnmA was generated. The gene was successfully disrupted by homologous recombination, the knock-out strain, however, did not show any obvious phenotype under normal laboratory conditions.
To identify specific target sequences for DNA methylation, a microarray analysis was carried out. Setting a threshold of at least 1.5 fold for differences in the strength of gene expression, several such genes in the knock-out strain were chosen for further investigation. Among the up-regulated genes were the ESTs representing the gag and the RT genes respectively of the retrotransposon skipper. In addition Northern blot analysis confirmed the up-regulation of skipper in the DnmA knock-out strain.
Bisufite treatment and sequencing of specific DNA stretches from skipper revealed that DnmA is responsible for methylation of mostly asymmetric cytosines. Together with skipper, DIRS-1 retrotransposon was found later also to be methylated but was not present on the microarray.
Furthermore, skipper transcription was also up-regulated in strains that had genes disrupted encoding components of the RNA interference pathway. In contrast, DIRS 1 expression was not affected by a loss of DnmA but was strongly increased in the strain that had the RNA directed RNA polymerase gene rrpC disrupted.
Strains generated by propagating the usual wild type Ax2 and the DnmA knock-out cells over 16 rounds in development were analyzed for transposon activity. Northern blot analysis revealed activation for skipper expression, but not for DIRS-1.
A large number of siRNAs were found to be correspondent to the DIRS-1 sequence, suggesting concerted regulation of DIRS-1 expression by RNAi and DNA methylation. In contrast, no siRNAs corresponding to the standard skipper element were found.
The data show that DNA methylation plays a crucial role in epigenetic gene regulation in Dictyostelium and that different, partially overlapping mechanisms control transposon silencing for skipper and DIRS-1.
To elucidate the mechanism of targeting the protein to particular genes in the Dictyostelium genome, some more genes which were up-regulated in the DnmA knock-out strain were analyzed by bisulfite sequencing. The chosen genes are involved in the multidrug response in other species, but their function in Dictyostelium is uncertain. Bisulfite data showed that two of these genes were methylated at asymmetrical C-residues in the wild type, but not in DnmA knock-out cells. This suggested that DNA methylation in Dictyostelium is involved not only in transposon regulation but also in transcriptional silencing of specific genes.