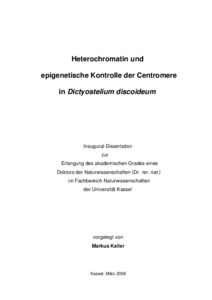 (Heterochromatin and epigenetic control of centromeres in Dictyostelium discoideum)

Heterochromatin Protein 1 (HP1) is an evolutionarily conserved protein required for formation of a higher-order chromatin structures and epigenetic gene silencing.
The objective of the present work was to functionally characterise HP1-like proteins in Dictyostelium discoideum, and to investigate their function in heterochromatin formation and transcriptional gene silencing.
The Dictyostelium genome encodes three HP1-like proteins (hcpA, hcpB, hcpC), from which only two, hcpA and hcpB, but not hcpC were found to be expressed during vegetative growth and under developmental conditions. Therefore, hcpC, albeit no obvious pseudogene, was excluded from this study.
Both HcpA and HcpB show the characteristic conserved domain structure of HP1 proteins, consisting of an N-terminal chromo domain and a C-terminal chromo shadow domain, which are separated by a hinge.
Both proteins show all biochemical activities characteristic for HP1 proteins, such as homo- and heterodimerisation in vitro and in vivo, and DNA binding activtity. HcpA furthermore seems to bind to K9-methylated histone H3 in vitro. The proteins thus appear to be structurally and functionally conserved in Dictyostelium.
The proteins display largely identical subnuclear distribution in several minor foci and concentration in one major cluster at the nuclear periphery. The localisation of this cluster adjacent to the nucleus-associated centrosome and its mitotic behaviour strongly suggest that it represents centromeric heterochromatin. Furthermore, it is characterised by histone H3 lysine-9 dimethylation (H3K9me2), which is another hallmark of Dictyostelium heterochromatin. Therefore, one important aspect of the work was to characterise the so-far largely unknown structural organisation of centromeric heterochromatin.
The Dictyostelium homologue of inner centromere protein INCENP (DdINCENP), co-localized with both HcpA and H3K9me2 during metaphase, providing further evidence that H3K9me2 and HcpA/B localisation represent centromeric heterochromatin.
Chromatin immunoprecipitation (ChIP) showed that two types of high-copy number retrotransposons (DIRS-1 and skipper), which form large irregular arrays at the chromosome ends, which are thought to contain the Dictyostelium centromeres, are characterised by H3K9me2.
Neither overexpression of full-length HcpA or HcpB, nor deletion of single Hcp isoforms resulted in changes in retrotransposon transcript levels. However, overexpression of a C-terminally truncated HcpA protein, assumed to display a dominant negative effect, lead to an increase in skipper retrotransposon transcript levels. Furthermore, overexpression of this protein lead to severe growth defects in axenic suspension culture and reduced cell viability.
In order to elucidate the proteins functions in centromeric heterochromatin formation, gene knock-outs for both hcpA and hcpB were generated. Both genes could be successfully targeted and disrupted by homologous recombination. Surprisingly, the degree of functional redundancy of the two isoforms was, although not unexpected, very high. Both single knock-out mutants did not show any obvious phenotypes under standard laboratory conditions and only deletion of hcpA resulted in subtle growth phenotypes when grown at low temperature.
All attempts to generate a double null mutant failed. However, both endogenous genes could be disrupted in cells in which a rescue construct that ectopically expressed one of the isoforms either with N-terminal 6xHis- or GFP-tag had been introduced. The data imply that the presence of at least one Hcp isoform is essential in Dictyostelium. The lethality of the hcpA/hcpB double mutant thus greatly hampered functional analysis of the two genes.
However, the experiment provided genetic evidence that the GFP-HcpA fusion protein, because of its ability to compensate the loss of the endogenous HcpA protein, was a functional protein.
The proteins displayed quantitative differences in dimerisation behaviour, which are conferred by the slightly different hinge and chromo shadow domains at the C-termini.
Dimerisation preferences in increasing order were HcpA-HcpA << HcpA-HcpB << HcpB-HcpB.
Overexpression of GFP-HcpA or a chimeric protein containing the HcpA C-terminus (GFP-HcpBNAC), but not overexpression of GFP-HcpB or GFP-HcpANBC, lead to increased frequencies of anaphase bridges in late mitotic cells, which are thought to be caused by telomere-telomere fusions.
Chromatin targeting of the two proteins is achieved by at least two distinct mechanisms. The N-terminal chromo domain and hinge of the proteins are required for targeting to centromeric heterochromatin, while the C-terminal portion encoding the CSD is required for targeting to several other chromatin regions at the nuclear periphery that are characterised by H3K9me2. Targeting to centromeric heterochromatin likely involves direct binding to DNA.
The Dictyostelium genome encodes for all subunits of the origin recognition complex (ORC), which is a possible upstream component of HP1 targeting to chromatin. Overexpression of GFP-tagged OrcB, the Dictyostelium Orc2 homologue, showed a distinct nuclear localisation that partially overlapped with the HcpA distribution. Furthermore, GFP-OrcB localized to the centrosome during the entire cell cycle, indicating an involvement in centrosome function.
DnmA is the sole DNA methyltransferase in Dictyostelium required for all DNA(cytosine-)methylation. To test for its in vivo activity, two different cell lines were established that ectopically expressed DnmA-myc or DnmA-GFP. It was assumed that overexpression of these proteins might cause an increase in the 5-methyl-cytosine(5-mC)-levels in the genomic DNA due to genomic hypermethylation. Although DnmA-GFP showed preferential localisation in the nucleus, no changes in the 5-mC-levels in the genomic DNA could be detected by capillary electrophoresis.