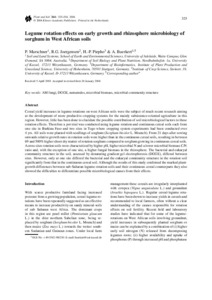 Cereal yield increases in legume rotations on west African soils were the subject of much recent research aiming at the development of more productive cropping systems for the mainly subsistence-oriented agriculture in this region. However, little has been done to elucidate the possible contribution of soil microbiological factors to these rotation effects. Therefore a pot trial was conducted using legume rotation and continuous cereal soils each from one site in Burkina Faso and two sites in Togo where cropping system experiments had been conducted over 4 yrs. All soils were planted with seedlings of sorghum (Sorghum bicolor L. Moench). From 21 days after sowing onwards relative growth rates in rotation soils were higher than in the continuous cereal soils, resulting in between 69 and 500% higher shoot dry matter of rotation sorghum compared to sorghum growing in continuous cereal soils. Across sites rotation soils were characterized by higher pH, higher microbial N and a lower microbial biomass C/N ratio and, with the exception of one site, a higher fungal biomass in the rhizosphere. The bacterial and eukaryal community structure in the soil, assessed by denaturing gradient gel electrophoresis (DGGE), differed between
sites. However, only at one site differed the bacterial and the eukaryal community structure in the rotation soil significantly from that in the continuous cereal soil. Although the results of this study confirmed the marked plantgrowth differences between sub-Saharan legume-rotation soils and their continuous cereal counterparts they also showed the difficulties to differentiate possible microbiological causes from their effects.