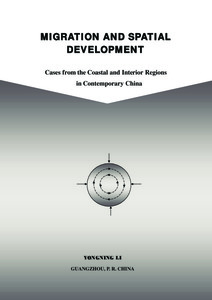 (Cases from the Coastal and Interior Regions in Contemporary China)

This is an empirical study with theoretical interpretation and elaboration simultaneously on the migration process and the related spatial development in contemporary China. In so doing, there is always a combination of series of studies of the modernization of the migrants themselves with accumulation of forms of capital and changes of lebenswelt (life world) as well as the regions of their origins by the effective use of the gained resources from outgoing migration and remigration. With great efforts made to put the issues together for analysis, the author has taken three approaches to the study based on the political and economic institutional arrangements, the field work data and the elaboration of respective findings.
First, as the analytical parts of the institutional changes, which have gone through the whole research, many of the policies from state level to townships involved in the migration, remigration and spatial development have been interpreted with Chinese political and cultural insight. The making of these, as the means of understanding the contexts of macro level and micro level cases is served as key linkages between scholarly imagination and social reality. Indeed most of the discussions made to explain the phenomena such as the sudden upsurge of migration flows, the emergence of three generations, the strong and weak trends of remigration as well as the related spatial development planning, etc are mainly due to the domination, at least the impact of governments decision-making in spite of growing market functioning in often operative manners.
Secondly, case studies of the effects of migration and remigration are carried out between the years of 1995 and 2005 in the costal urban regions as designations and the interior rural regions as origins. Conducted mainly by the author, the cases drawn in the research focus on the process of migration with an accumulation of forms of capital away from home and the effective use of the resources flowing back to home areas. As a result, ways of accumulation and utilization of the economic, social and cultural capital are described and interpreted in terms of the development and modernization of both the migrants themselves and the regions where they come out from or move to in the future.
Thirdly, in accordance with the findings generated from the cases, the author proposes in the final chapter an important argumentation as conclusion that the duel social-economic structure will inevitably be broken up and reformulated with flows of migrants and forms of capital they possess as types of future spatial development that will be put into practice. With scenarios and all the other conclusions worked out in the end, the research concludes that the pluralistic spatial development in the condition of constant space flows between regions can be a decisive line of thinking in the process of urbanization, industrialization and modernization in the long run in the future.
Since this is an exploratory study of the past and present, the author has left some space open for academic debates and put forward suggestions on the inclusion of future research before implementing policies necessary for migration associated spatial practice and development.