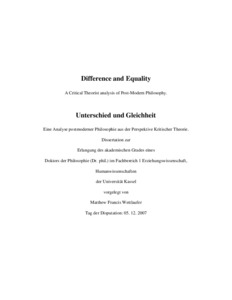 Difference and equality: A critical theorist analysis of post-modern philosophy