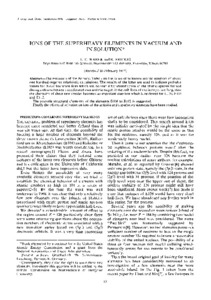 Ions of the superheavy elements in vacuum and in solution

The extension of the Periodic Table into the range of unknown atomic numbers of above
one hundred requires relativistic calculations. The results of the latter are used to indicate probable values for X-ray transition lines which will be useful for identification of the atomic species formed
during collision between accelerated ions and the target. If the half-lives of the isotopes are long, then the chemistry of these new species becomes an important question which is reviewed for E110, E 111
and E112.
The possible structural chemistry of the elements E108 to E112 is suggested.
Finally the effects of solvation on ions of the actinide and superheavy elements have been studied.

In: Proceedings of the Moscow Symposium on the "Chemistry of transuranium elements" : publ. as a supplement to the Journal of Inorganic and Nuclear Chemistry. - Oxford [u.a.] : Pergamon Press, 1976, S. 13 - 24