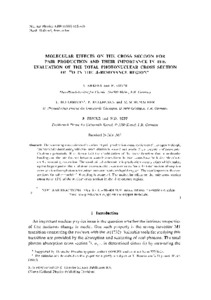 The screening correction to the coherent pair-production cross section on the oxygen molecule has been calculated using self-consistent relativistic wave functions for the one-center and two-center
Coulomb potentials. It is shown that the modification of the wave function due to molecular binding and the interference between contributions from the two atoms have both sizeable effects on the screening correction. The so-obtained coherent pair-production cross section which makes
up the largest part of the total atomic cross section was used to evaluate the total nuclear absorption cross section from photon attenuation measurements on liquid oxygen. The result agrees with cross
sections for other nuclei if A-scaling is assumed. The molecular effect on the pair cross section
amounts to 15 % of the nuclear cross section in the {\delta-resonance} region.