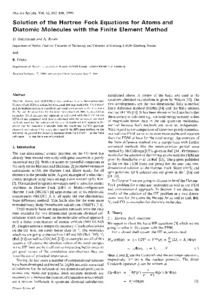 The finite element method (FEM) is now developed to solve two-dimensional
Hartree-Fock (HF) equations for atoms and diatomic molecules. The method
and its implementation is described and results are presented for the atoms
Be, Ne and Ar as well as the diatomic molecules LiH, BH, N_2 and CO as
examples. Total energies and eigenvalues calculated with the FEM on the
HF-level are compared with results obtained with the numerical standard
methods used for the solution of the one dimensional HF equations for
atoms and for diatomic molecules with the traditional LCAO quantum
chemical methods and the newly developed finite difference method on the
HF-level. In general the accuracy increases from the LCAO - to the finite
difference - to the finite element method.