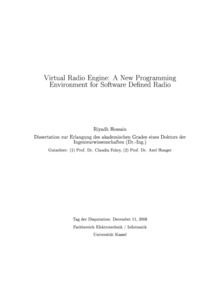 Software Defined Radio (SDR) hardware platforms use parallel architectures. Current concepts of developing applications (such as WLAN) for these platforms are complex, because developers describe an application with hardware-specifics that are relevant to parallelism such as mapping and scheduling. To reduce this complexity, we have developed a new programming approach for SDR applications, called Virtual Radio Engine (VRE). VRE defines a language for describing applications, and a tool chain that consists of a compiler kernel and other tools (such as a code generator) to generate executables. The thesis presents this concept, as well as describes the language and the compiler kernel that have been developed by the author. The language is hardware-independent, i.e., developers describe tasks and dependencies between them. The compiler kernel performs automatic parallelization, i.e., it is capable of transforming a hardware-independent program into a hardware-specific program by solving hardware-specifics, in particular mapping, scheduling and synchronizations. Thus, VRE simplifies programming tasks as developers do not solve hardware-specifics manually.