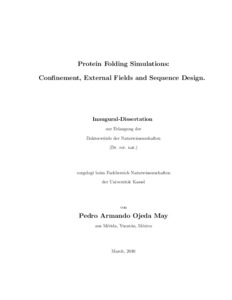 The present Thesis looks at the problem of protein
folding using Monte Carlo and Langevin simulations, three topics in protein
folding have been studied: 1) the effect of confining potential barriers,
2) the effect
of a static external field and 3) the design of amino acid sequences which fold
in a short time and which have a stable native state (global minimum).

Regarding the first topic, we studied the confinement of a small protein
of 16 amino acids known as 1NJ0 (PDB code) which has a beta-sheet structure
as a native state.
The confinement of proteins occurs frequently in the cell environment.
Some molecules called Chaperones, present in the cytoplasm,
capture the unfolded proteins in their interior and avoid the
formation of aggregates and misfolded proteins.
This mechanism of confinement mediated by Chaperones is not yet well understood.
In the present work we considered two kinds of potential barriers
which try to mimic the
confinement induced by a Chaperon molecule.
The first kind of potential was a
purely repulsive barrier whose only effect is to create a cavity
where the protein folds up correctly. The second kind of potential was a barrier
which includes both attractive and repulsive effects.
We performed Wang-Landau simulations to calculate the thermodynamical
properties of 1NJ0.
From the free energy landscape plot
we found that 1NJ0 has two intermediate states in the bulk
(without confinement) which are clearly separated from the
native and the unfolded states.
For the case of the purely repulsive barrier we found that
the intermediate states
get closer to each other in the free energy landscape plot and eventually they collapse
into a single intermediate state.
The unfolded state is more
compact, compared to that in the bulk, as the size of
the barrier decreases.
For an attractive barrier modifications of the states
(native, unfolded and intermediates)
are observed depending on the degree of attraction between
the protein and the walls of the barrier.
The strength of the attraction is measured by the parameter
$\epsilon$. A purely repulsive barrier is obtained for $\epsilon=0$
and a purely attractive barrier for $\epsilon=1$.
The states are
changed slightly for magnitudes of the attraction up to $\epsilon=0.4$.
The disappearance of the intermediate states of 1NJ0 is already
observed for $\epsilon =0.6$. A very high attractive barrier
($\epsilon \sim 1.0$) produces a completely denatured state.

In the second topic of this Thesis we dealt with the interaction
of a protein with an external electric field.
We demonstrated by means of computer simulations, specifically by
using the Wang-Landau algorithm, that
the folded, unfolded, and intermediate states can be modified
by means of a field.
We have found that an external field can induce several modifications in
the thermodynamics of these states:
for relatively low magnitudes of the field ($<2.06 \times 10^8$ V/m)
no major changes in the states are observed. However, for higher magnitudes than
($6.19 \times 10^8$ V/m) one observes the appearance of a new native state
which exhibits a helix-like structure. In contrast, the
original native state is a $\beta$-sheet structure.
In the new native state all the dipoles in the backbone structure are
aligned parallel to the field.

The design of amino acid sequences constitutes the
third topic of the present work. We have tested the Rate of Convergence
criterion proposed by D. Gridnev and M. Garcia ({\it work unpublished}).
We applied it to the study of off-lattice models.
The Rate of Convergence criterion is used to decide if a certain sequence
will fold up correctly within a relatively short time.
Before the present work, the common way
to decide if a certain sequence was a good/bad folder was by
performing the whole dynamics until the sequence got its native state
(if it existed), or by studying the curvature of the potential energy surface.
There are some difficulties in the last two approaches. In the first approach,
performing the complete dynamics for hundreds of sequences
is a rather challenging task because of the CPU time needed.
In the second approach,
calculating the curvature of the potential energy surface is possible
only for very smooth surfaces.
The Rate of Convergence criterion seems to avoid the previous difficulties.
With this criterion one does not need to perform
the complete dynamics to find the good and bad sequences. Also,
the criterion does not depend on the kind of force field used and therefore
it can be used even for very rugged energy surfaces.