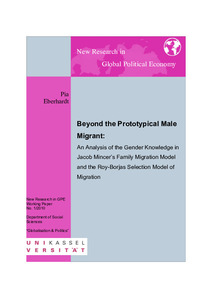 Beyond the Prototypical Male Migrant

The primary theoretical accounts of migration have been largely unaffected by the feminisation of migration. But this does not mean that they are gender neutral. Drawing on the concept of gender knowledge developed by German sociologists Irene Dölling and Sünne Andresen, on the feminist critique of knowledge, feminist economics and studies on gender and migration, the paper interrogates two influential models of migration from neoclassical economics for their gendered assumptions: the Roy-Borjas selection model of migration and Jacob Mincer’s model of family migration. An analysis of their gendered assumptions about the individual, the family, the institution of the labour market and immigration policies shows that both theories explicitly and implicitly assume a male migrant as the norm and frame female migrants as passive dependents. However, the paper argues that it is not “men as such” who serve as prototypical migrants, but a specific type of white, heterosexual and middle-class masculinity, which is set as the norm while other migration realities and knowledge about the structuration of migration processes through social relations of gender, race and class are excluded. Finally, it is argued that with knowledge being a powerful site for the production of meaning in social relations, the gender knowledge in mainstream migration theories could lead to discriminatory migration policies and might also affect migrant subjectivities. This underscores the need for a more sustained dialogue between feminist and mainstream migration scholarship to further engender the field.

Funded by the research project “Economic gender knowledge in the Governance of Migration”, led by Christoph Scherrer and Helen Schwenken and funded by the Hessian Ministry of Science and Arts (funding scheme “Gender differences”, 2007/14, 2007-2008).