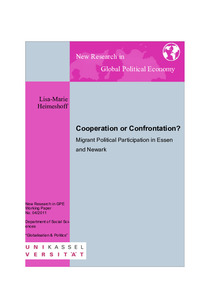 With globalization and increased connectedness, migration has become a political issue. Nevertheless, without citizenship participation in the political system in the host society is limited. Based on a neo-institutionalist approach and referring to political opportunity structure theory, this paper analyzes differences in means of political participation by migrants in two cities, one in the U.S. and one in Germany. Specific focus is put on the welfare state as one factor potentially influencing forms of participation of migrants. From interviews with migrants, local governments, and organizations, this paper establishes that political participation in the German city, Essen, is more institutionalized than in the U.S. city, Newark, NJ, where demonstrations and rallies play a more significant role. Looking at these findings, this paper explains the differences with a variation in the political opportunity structure between the two cities. Whereas in the conservative-corporatist welfare state, ideas of collective bar-gaining and the conferral of social rights to migrants leads to government-created bodies for migrant participation, in the U.S. city, these bodies do not exist and, therefore, migrants use different means of political participation. Through the conferral of social rights on migrants as well, in Germany, the cleavage between migrants and majority society has been pacified. In the U.S. city, where this is not the case, demonstrations and rallies are more common.