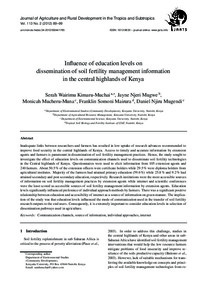 Inadequate links between researchers and farmers has resulted in low uptake of research advances recommended to improve food security in the central highlands of Kenya. Access to timely and accurate information by extension agents and farmers is paramount in dissemination of soil fertility management practices. Hence, the study sought to investigate the effect of education levels on communication channels used to disseminate soil fertility technologies in the Central highlands of Kenya. Questionnaires were used to elicit information from 105 extension agents and 240 farmers. About 50.5% of the extension officers were certificate holders while 29.5% were diploma holders from agricultural institutes. Majority of the farmers had attained primary education (59.6%) while 25.8% and 9.2% had attained secondary and post secondary education, respectively. Research institutions were the most accessible sources of information on soil fertility management practices by extension agents while internet and scientific conferences were the least scored as accessible sources of soil fertility management information by extension agents. Education levels significantly influenced preference of individual approach methods by farmers. There was a significant positive relationship between education and accessibility of internet as a source of information on green manure. The implication of the study was that education levels influenced the mode of communication used in the transfer of soil fertility research outputs to the end users. Consequently, it is extremely important to consider education levels in selection of dissemination pathways used in agriculture.