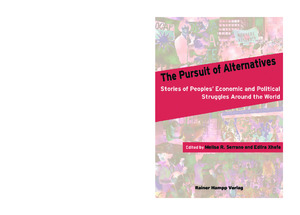 The Pursuit of Alternatives

(Stories of Peoples’ Economic and Political Struggles Around the World)

Stories of peoples’ struggles across the globe are testaments to their determination to resist exploitation and injustice, and to imagine and construct their own narratives of economic and political difference. These stories of emancipatory moments demonstrate that something radically different in terms of dominant socio-economic relations and mental conceptions of the world may arise out of and beyond capitalism. The Pursuit of Alternatives: Stories of Peoples’ Economic and Political Struggles Around the World presents a fresh and new perspective on how the ‘process of becoming’ alternatives might take place based on peoples’ lived experiences. The chapters here, by labour activists and academics, explore how various forms of peoples’ economic and political initiatives and struggles in six countries – Brazil, Canada, Colombia, Nigeria, the Philippines, and South Korea – might become ‘actually existing’ spaces and moments for the development of critical consciousness and transformative capacities which are both central in challenging the dominant social, economic and political relations. The stories in this book bring to light today’s language of peoples’ struggles; what inspires people to create their own emancipatory moments and spaces for transformative self-change. While this book does not aim to propose an alternative to capitalism per se, it makes a stimulating contribution to the continuing debate on what alternatives to capitalist relations and arrangements might look like by grounding these alternatives in the everyday lives and struggles of workers, women, aboriginal peoples, the unemployed, and the poor.