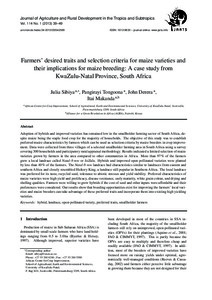 Farmers’ desired traits and selection criteria for maize varieties and their implications for maize breeding: A case study from KwaZulu-Natal Province, South Africa

Adoption of hybrids and improved varieties has remained low in the smallholder farming sector of South Africa, despite maize being the staple food crop for the majority of households. The objective of this study was to establish preferred maize characteristics by farmers which can be used as selection criteria by maize breeders in crop improvement. Data were collected from three villages of a selected smallholder farming area in South Africa using a survey covering 300 households and participatory rural appraisal methodology. Results indicated a limited selection of maize varieties grown by farmers in the area compared to other communities in Africa. More than 97% of the farmers grew a local landrace called Natal-8-row or IsiZulu. Hybrids and improved open pollinated varieties were planted by less than 40% of the farmers. The Natal-8-row landrace had characteristics similar to landraces from eastern and southern Africa and closely resembled Hickory King, a landrace still popular in Southern Africa. The local landrace was preferred for its taste, recycled seed, tolerance to abiotic stresses and yield stability. Preferred characteristics of maize varieties were high yield and prolificacy, disease resistance, early maturity, white grain colour, and drying and shelling qualities. Farmers were willing to grow hybrids if the cost of seed and other inputs were affordable and their preferences were considered. Our results show that breeding opportunities exist for improving the farmers’ local varieties and maize breeders can take advantage of these preferred traits and incorporate them into existing high yielding varieties.