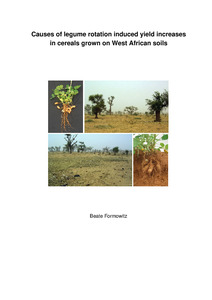 This study was conducted to investigate soil biological and chemical factors that give rise to cereal yield enhancing effects of legume rotations on sandy, nutrient poor West African soils. The aim was not only to gain more information on the role of legume residues and microorganisms in the soil nutrient cycle. But the study aimed at evaluating if differences in substrate qualities (e.g. root residues) cause changes in the microbial community structure due to specific and highly complex microbe-root-soil interactions.
Site and system specific reactions of microorganisms towards rewetting, simulating the onset of rainy season, were observed. Higher respiration rates, higher amounts of microbial biomass carbon (Cmic) and nitrogen (Nmic) as well as higher ergosterol, muramic acid, glucosamine and adenylate concentrations were measured in CL soils of Koukombo and in both soils from Fada. The immediate increase in ATP concentrations after rewetting was likely caused by rehydration of microbial cells where N was not immobilized and, thus, available for plants facilitating their rapid development.
Legume root residues led only to slightly better plant performances compared to the control, while the application of cereal roots reduced seedling growth. In contrast to sorghum seedlings, the microbial community did not react to the mineral treatment. Thus the energy supply in form of organic amendments increased microbial indices compared to mineral P application and the control. The results of basal respiration rates, Cmic and Corg levels indicate that the microbial community in the soil from Koukombo is less efficient in substrate use compared to microorganisms in the soil from Fada. However, the continuous carbon input by legume root residues might have contributed to these differences in soil fertility. With the 33P isotopic exchange method a low buffering capacity was detected in both soils irrespective of treatments. Calculated E values (E1min to E1min-1d and E1d-3m) indicated a slowly release of P due to root turnover while applied mineral P is taken up by plants or fixed to the soil. Due to the fact that sorghum growth reacted mainly to the application of mineral P and the microorganisms solely to the organic inputs, the combination of both amendments seems to be the best approach to a sustainable increase of crop production on many nutrient-poor, sandy West African soils.
In a pot experiment, were CC and CL soils from Fada and Koukombo were adjusted to the same level of P and N concentrations, crop growth was significantly higher on CL soils, compared to the respective treatments on CC soils. Mycorrhizal infection of roots was increased and the number of nematodes, predominantly free living nematodes, was almost halfed on rotation soils. In conclusion, increased nutrient availability (especially P and N) through the introduction of legumes is not the only reason for the observed yield increasing effects. Soil biological factors seem to also play an important role.
In a root chamber experiment the pH gradient along the root-soil-interface was measured at three times using an antimony microelectrode. For Fada soils, pH values were higher on CL than CC soils while the opposite was true for the Koukombo soils. Site-specific differences between Fada and Koukombo soils in N content and microbial community structures might have created varying crop performances leading to the contrasting pH findings. However, the mechanisms involved in this highly complex microbe-root-soil interaction remain unclear.

This study was financed by the German Research Foundation (DFG, BU 1308/4-1)