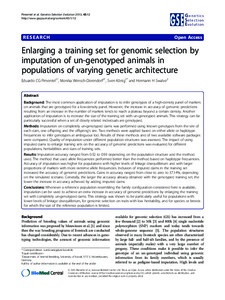 Background: The most common application of imputation is to infer genotypes of a high-density panel of markers
on animals that are genotyped for a low-density panel. However, the increase in accuracy of genomic predictions
resulting from an increase in the number of markers tends to reach a plateau beyond a certain density. Another
application of imputation is to increase the size of the training set with un-genotyped animals. This strategy can be
particularly successful when a set of closely related individuals are genotyped.
----- Methods: Imputation on completely un-genotyped dams was performed using known genotypes from the sire of
each dam, one offspring and the offspring’s sire. Two methods were applied based on either allele or haplotype
frequencies to infer genotypes at ambiguous loci. Results of these methods and of two available software packages
were compared. Quality of imputation under different population structures was assessed. The impact of using
imputed dams to enlarge training sets on the accuracy of genomic predictions was evaluated for different
populations, heritabilities and sizes of training sets.
----- Results: Imputation accuracy ranged from 0.52 to 0.93 depending on the population structure and the method
used. The method that used allele frequencies performed better than the method based on haplotype frequencies.
Accuracy of imputation was higher for populations with higher levels of linkage disequilibrium and with larger
proportions of markers with more extreme allele frequencies. Inclusion of imputed dams in the training set
increased the accuracy of genomic predictions. Gains in accuracy ranged from close to zero to 37.14%, depending
on the simulated scenario. Generally, the larger the accuracy already obtained with the genotyped training set, the
lower the increase in accuracy achieved by adding imputed dams.
----- Conclusions: Whenever a reference population resembling the family configuration considered here is available,
imputation can be used to achieve an extra increase in accuracy of genomic predictions by enlarging the training
set with completely un-genotyped dams. This strategy was shown to be particularly useful for populations with
lower levels of linkage disequilibrium, for genomic selection on traits with low heritability, and for species or breeds
for which the size of the reference population is limited.