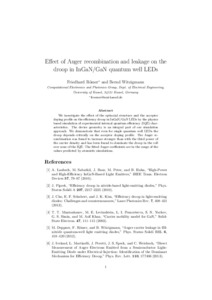 We investigate the effect of the epitaxial structure and the acceptor doping profile on the efficiency droop in InGaN/GaN LEDs by the physics based simulation of experimental internal quantum efficiency (IQE) characteristics. The device geometry is an integral part of our simulation approach. We demonstrate that even for single quantum well LEDs the droop depends critically on the acceptor doping profile. The Auger recombination was found to increase stronger than with the third power of the carrier density and has been found to dominate the droop in the roll over zone of the IQE. The fitted Auger coefficients are in the range of the values predicted by atomistic simulations.