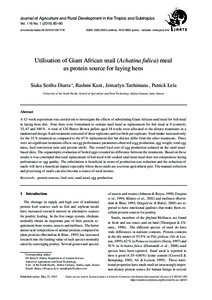 A 12-week experiment was carried out to investigate the effects of substituting Giant African snail meal for fish meal in laying hens diet. Four diets were formulated to contain snail meal as replacement for fish meal at 0 (control), 33, 67 and 100%. A total of 120 Shaver Brown pullets aged 18 weeks were allocated to the dietary treatments in a randomised design. Each treatment consisted of three replicates and ten birds per replicate. Feed intake increased only for the 33% treatment as compared to the 67% replacement diet but did not differ from the other treatments. There were no significant treatment effects on egg performance parameters observed (egg production, egg weight, total egg mass, feed conversion ratio and percent shell). The overall feed cost of egg production reduced on the snail meal-based diets. The organoleptic evaluation of boiled eggs revealed no difference between the treatments. Based on these results it was concluded that total replacement of fish meal with cooked snail meat meal does not compromise laying performance or egg quality. The substitution is beneficial in terms of production cost reduction and the reduction of snails will have a beneficial impact especially where these snails are a serious agricultural pest. The manual collection and processing of snails can also become a source of rural income.