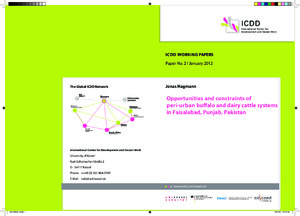 In the big cities of Pakistan, peri-urban dairy production plays an important role for household
income generation and the supply of milk and meat to the urban population. On the other hand,
milk production in general, and peri-urban dairy production in particular, faces numerous problems
that have been well known for decades. Peri-urban dairy producers have been especially neglected
by politicians as well as non-government-organizations (NGOs).
Against this background, a study in Pakistan’s third largest city, Faisalabad (Punjab Province), was
carried out with the aims of gathering basic information, determining major constraints and
identifying options for improvements of the peri-urban milk production systems. For data
collection, 145 peri-urban households (HH) engaged in dairy production were interviewed face to
face using a structured and pretested questionnaire with an interpreter. For analyses, HH were
classified into three wealth groups according to their own perception. Thus, 38 HH were poor, 95
HH well off and 12 HH rich (26.2%, 65.5% and 8.3%, respectively). The richer the respondents
perceived their HH, the more frequently they were actually in possession of high value HH assets
like phones, bank accounts, motorbikes, tractors and cars.
Although there was no difference between the wealth groups with respect to the number of HH
members (about 10, range: 1 to 23), the educational level of the HH heads differed significantly: on
average, heads of poor HH had followed education for 3 years, compared to 6 years for well off HH
and 8 years for rich HH. About 40% of the poor and well off HH also had off-farm incomes, while the
percentage was much higher - two thirds (67%) - for the rich HH. The majority of the HH were
landless (62%); the rest (55 HH) possessed agricultural land from 0.1 to 10.1 ha (average 2.8 ha),
where they were growing green fodder: maize, sorghum and pearl millet in summer; berseem,
sugar cane and wheat were grown in winter.
Dairy animals accounted for about 60% of the herds; the number of dairy animals per HH ranged
from 2 to 50 buffaloes (Nili-Ravi breed) and from 0 to 20 cows (mostly crossbred, also Sahiwal).
About 37% (n=54) of the HH did not keep cattle. About three quarters of the dairy animals were
lactating.
The majority of the people taking care of the animals were family workers; 17.3% were
hired labourers (exclusively male), employed by 11 rich and 32 well off HH; none of the
poor HH employed workers, but the percentages were 33.7% for the well off and 91.7% for the rich
HH. The total number of workers increased significantly with increasing wealth (poor: 2.0; well off:2.5; rich: 3.4). Overall, 69 female labourers were recorded, making up 16.8% of employed workers
and one fourth of the HH’s own labourers. Apparently, their only duty was to clean the animals´
living areas; only one of them was also watering and showering the animals. Poor HH relied more
on female workers than the other two groups: 27.1% of the workers of poor HH were women, but
only 14.8% and 6.8% of the labour force of well off and rich HH were female.
Two thirds (70%) of the HH sold milk to dhodis (middlemen) and one third (35%) to neighbours;
three HH (2%) did doorstep delivery and one HH (1%) had its own shop. The 91 HH keeping both
species usually sold mixed milk (97%). Clients for mixed and pure buffalo milk were dhodis (78%,
respectively 59%) and neighbours (28%, respectively 47%). The highest milk prices per liter
(Pakistani Rupees, 100 PKR @ 0.8 Euro) were paid by alternative clients (44 PKR; 4 HH), followed by
neighbours (40 PKR, 50 HH); dhodis paid lower prices (36 PKR, 99 HH). Prices for pure buffalo and
mixed milk did not differ significantly. However, HH obtaining the maximum price from the
respective clients for the respective type of milk got between 20% (mixed milk, alternative clients)
and 68% (mixed milk, dhodi) more than HH fetching the minimum price. Some HH (19%) reported
7% higher prices for the current summer than the preceding winter. Amount of milk sold and
distance from the HH to the city center did not influence milk prices.
Respondents usually named problems that directly affected their income and that were directly
and constantly visible to them, such as high costs, little space and fodder shortages. Other
constraints that are only influencing their income indirectly, e.g. the relatively low genetic potential
of their animals due to neglected breeding as well as the short- and long-term health problems
correlated with imbalanced feeding and insufficient health care, were rarely named. The same
accounts for problems accompanying improper dung management (storage, disposal, burning
instead of recycling) for the environment and human health. Most of the named problems are
linked to each other and should be addressed within the context of the entire system. Therefore,
further research should focus on systematic investigations and improvement options, taking a
holistic and interdisciplinary approach instead of only working in single fields. Concerted efforts of
dairy farmers, researchers, NGOs and political decision makers are necessary to create an economic,
ecological and social framework that allows dairy production to serve the entire society. For this,
different improvement options should be tested in terms of their impact on environment and
income of the farmers, as well as feasibility and sustainability in the peri-urban zones of Faisalabad.