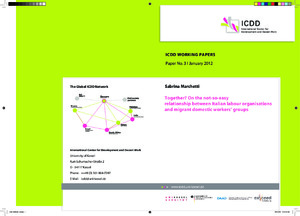 This paper explores the relationship between migrant leaders and labour
rights activists starting with the acknowledgment that this is often a source
of frustration for all subjects involved. The collaboration between
organisations of migrants and those of workers is not always smooth and
truly collaborative, yet foreign workers have an increasing importance in
the negotiation of better labour rights in Europe. The topic is discussed by
taking the case of migrant domestic labour in Italy and the experience of
Italian and Filipino organisation leaders who campaign for better rights in
this sector. The discussion will be developed by bringing together the
perspectives of three key actors in the field: trade unions, Christian labour
organisations, and Filipino women's groups. Through the analysis of indepth
interviews with women representatives of these organisations,
impediments in the collaborations among them will be discussed, including
difficulties in identifying an egalitarian method for pursuing common goals
together, lack of 'trust' in the good-will of labour organisations from the side
of migrants, and finally, the limits of what will be called 'bridge-persons', i.e.
trade unionists with migrant backgrounds who are expected to facilitate
the connection between the two groups.