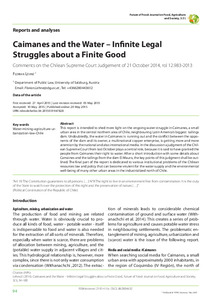 Caimanes and the Water - Infinite Legal Struggles about a Finite Good

This report is intended to shed more light on the ongoing water struggle in Caimanes, a small
urban area in the central northern area of Chile, neighbouring Latin America’s biggest tailings
dam. Undoubtedly, the water in Caimanes is running out and the conflict between the opponents
of the dam and its owner, a multinational copper enterprise, is getting more and more
attention by the national and also international media. In the discussion a judgment of the Chilean
Supreme Court from last October plays a central role, because it is said to have granted the
people from Caimanes their right to water. After a short introduction with some details about
Camaines and the tailings from the dam El Mauro, the key points of this judgment shall be outlined.
The final part of the report is dedicated to various institutional problems of the Chilean
resources law and policy that can become virulent for the water supply and the environmental
well-being of many other urban areas in the industrialized north of Chile.