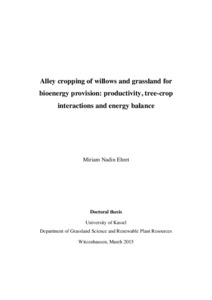 The demand for biomass for bioenergy has increased rapidly in industrialized countries in the recent years. Biogenic energy carriers are known to reduce CO2 emissions. However, the resource-inefficient production of biomass often caused negative impacts on the environment, e.g. biodiversity losses, nitrate leaching, and erosion. The detrimental effects evolved mainly from annual crops. Therefore, the aim of modern bioenergy cropping systems is to combine yield stability and environmental benefits by the establishment of mixed-cropping systems. A particular emphasis is on perennial crops which are perceived as environmentally superior to annual crops. Agroforestry systems represent such mixed perennial cropping systems and consist of a mix of trees and arable crops or grassland within the same area of land. Agroforestry practices vary across the globe and alley cropping is a type of agroforestry system which is well adapted to the temperate zone, with a high degree of mechanization. Trees are planted in rows and crops are planted in the alleyways, which facilitates their management by machinery.
This study was conducted to examine a young alley cropping system of willows and two grassland mixtures for bioenergy provision under temperate climate conditions. The first part of the thesis identified possible competition effects between willows and the two grassland mixtures. Since light seemed to be the factor most affecting the yield performance of the understory in temperate agroforestry systems, a biennial in situ artificial shade experiment was established over a separate clover-grass stand to quantify the effects of shade. Data to possible below- and aboveground interactions among willows and the two grassland mixtures and their effects on productivity, sward composition, and quality were monitored along a tree-grassland interface within the alleys. In the second part, productivity of the alley cropping system was examined on a triennial time frame and compared to separate grassland and willow stands as controls. Three different conversion technologies (combustion of hay, integrated generation of solid fuel and biogas from biomass, whole crop digestion) were applied to grassland biomass as feedstock and analyzed for its energetic potential. The energetic potential of willow wood chips was calculated by applying combustion as conversion technique. Net energy balances of separate grassland stands, agroforestry and pure willow stands evaluated their energy efficiency.
Results of the biennial artificial shade experiment showed that severe shade (80 % light reduction) halved grassland productivity on average compared to a non-shaded control. White clover as heliophilous plant responded sensitively to limited radiation and its dry matter contribution in the sward decreased with increasing shade, whereas non-leguminous forbs (mainly segetal species) benefited. Changes in nutritive quality could not be confirmed by this experiment. Through the study on interactions within the alleys of the young agroforestry system it was possible to outline changes of incident light, soil temperature and sward composition of clover-grass along the tree-grassland interface. Nearly no effects of trees on precipitation, soil moisture and understory productivity occurred along the interface during the biennial experiment. Considering the results of the productivity and the net energy yield alley cropping system had lower than pure grassland stands, irrespective of the grassland seed mixture or fertilization, but was higher than that for pure willow stands. The comparison of three different energetic conversion techniques for the grassland biomass showed highest net energy yields for hay combustion, whereas the integrated generation of solid fuel and biogas from biomass (IFBB) and whole crop digestion performed similarly. However, due to the low fuel quality of hay, its direct combustion cannot be recommended as a viable conversion technique, whereas IFBB fuels were of a similar quality to wood chip from willow.

This work was funded by the German Ministry of Education and Research.