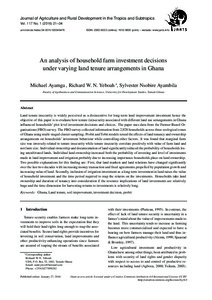 Land tenure insecurity is widely perceived as a disincentive for long-term land improvement investment hence the objective of this paper is to evaluate how tenure (in)security associated with different land use arrangements in Ghana influenced households’ plot level investment decisions and choices. The paper uses data from the Farmer-Based Organisations (FBO) survey. The FBO survey collected information from 2,928 households across three ecological zones of Ghana using multistaged cluster sampling. Probit and Tobit models tested the effects of land tenancy and ownership arrangements on households’ investment behaviour while controlling other factors. It was found that marginal farm size was inversely related to tenure insecurity while tenure insecurity correlate positively with value of farm land and not farm size. Individual ownership and documentation of land significantly reduced the probability of households losing uncultivated lands. Individual land ownership increased both the probability of investing and level of investments made in land improvement and irrigation probably due to increasing importance households place on land ownership. Two possible explanations for this finding are: First, that land markets and land relations have changed significantly over the last two decades with increasing money transaction and fixed agreements propelled by population growth and increasing value of land. Secondly, inclusion of irrigation investment as a long term investment in land raises the value of household investment and the time period required to reap the returns on the investments. Households take land ownership and duration of tenancy into consideration if the resource implications of land investments are relatively huge and the time dimension for harvesting returns to investments is relatively long.