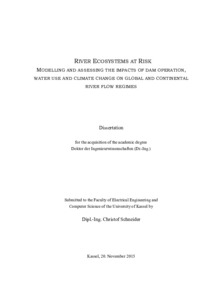 (Modelling and assessing the impacts of dam operation, water use and climate change on global and continental river flow regimes)

Worldwide water managers are increasingly challenged to allocate sufficient and affordable water supplies to different water use sectors without further degrading river ecosystems and their valuable services to mankind. Since 1950 human population almost tripled, water abstractions increased by a factor of four, and the number of large dam constructions is about eight times higher today. From a hydrological perspective, the alteration of river flows (temporally and spatially) is one of the main consequences of global change and further impairments can be expected given growing population pressure and projected climate change. Implications have been addressed in numerous hydrological studies, but with a clear focus on human water demands. Ecological water requirements have often been neglected or addressed in a very simplistic manner, particularly from the large-scale perspective. With his PhD thesis, Christof Schneider took up the challenge to assess direct (dam operation and water abstraction) and indirect (climate change) impacts of human activities on river flow regimes and evaluate the consequences for river ecosystems by using a modeling approach. The global hydrology model WaterGAP3 (developed at CESR) was applied and further developed within this thesis to carry out several model experiments and assess anthropogenic river flow regime modifications and their effects on river ecosystems. To address the complexity of ecological water requirements the assessment is based on three main ideas: (i) the natural flow paradigm, (ii) the perception that different flows have different ecological functions, and (iii) the flood pulse concept.
The thesis shows that WaterGAP3 performs well in representing ecologically relevant flow characteristics on a daily time step, and therefore justifies its application within this research field. For the first time a methodology was established to estimate bankfull flow on a 5 by 5 arc minute grid cell raster globally, which is a key parameter in eFlow assessments as it marks the point where rivers hydraulically connect to adjacent floodplains. Management of dams and water consumption pose a risk to floodplains and riparian wetlands as flood volumes are significantly reduced. The thesis highlights that almost one-third of 93 selected Ramsar sites are seriously affected by modified inundation patterns today, and in the future, inundation patterns are very likely to be further impaired as a result of new major dam initiatives and climate change. Global warming has been identified as a major threat to river flow regimes as rising temperatures, declining snow cover, changing precipitation patterns and increasing climate variability are expected to seriously modify river flow regimes in the future.
Flow regimes in all climate zones will be affected, in particular the polar zone (Northern Scandinavia) with higher river flows during the year and higher flood peaks in spring. On the other side, river flows in the Mediterranean are likely to be even more intermittent in the future because of strong reductions in mean summer precipitation as well as a decrease in winter precipitation, leading to an increasing number of zero flow events creating isolated pools along the river and transitions from lotic to lentic waters. As a result, strong impacts on river ecosystem integrity can be expected. Already today, large amounts of water are withdrawn in this region for agricultural irrigation and climate change is likely to exacerbate the current situation of water shortages.