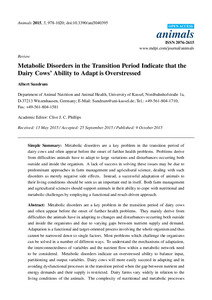 Metabolic disorders are a key problem in the transition period of dairy cows and often appear before the onset of further health problems. They mainly derive from difficulties the animals have in adapting to changes and disturbances occurring both outside and inside the organisms and due to varying gaps between nutrient supply and demand. Adaptation is a functional and target-oriented process involving the whole organism and thus cannot be narrowed down to single factors. Most problems which challenge the organisms can be solved in a number of different ways. To understand the mechanisms of adaptation, the interconnectedness of variables and the nutrient flow within a metabolic network need to be considered. Metabolic disorders indicate an overstressed ability to balance input, partitioning and output variables. Dairy cows will more easily succeed in adapting and in avoiding dysfunctional processes in the transition period when the gap between nutrient and energy demands and their supply is restricted. Dairy farms vary widely in relation to the living conditions of the animals. The complexity of nutritional and metabolic processes Animals 2015, 5 979 and their large variations on various scales contradict any attempts to predict the outcome of animals’ adaptation in a farm specific situation. Any attempts to reduce the prevalence of metabolic disorders and associated production diseases should rely on continuous and comprehensive monitoring with appropriate indicators on the farm level. Furthermore, low levels of disorders and diseases should be seen as a further significant goal which carries weight in addition to productivity goals. In the long run, low disease levels can only be expected when farmers realize that they can gain a competitive advantage over competitors with higher levels of disease.