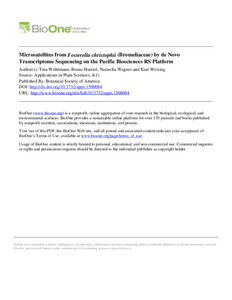 • Premise of the study: Microsatellite markers were developed in Fosterella christophii (Bromeliaceae) to investigate the
genetic diversity and population structure within the F. micrantha group, comprising F. christophii, F. micrantha, and
F. villosula.
• Methods and Results: Full-length cDNAs were isolated from F. christophii and sequenced on a Pacific Biosciences RS platform.
A total of 1590 high-quality consensus isoforms were assembled into 971 unigenes containing 421 perfect microsatellites.
Thirty primer sets were designed, of which 13 revealed a high level of polymorphism in three populations of F. christophii,
with four to nine alleles per locus. Each of these 13 loci cross-amplified in the closely related species F. micrantha and
F. villosula, with one to six and one to 11 alleles per locus, respectively.
• Conclusions: The new markers are promising tools to study the population genetics of F. christophii and to discover species
boundaries within the F. micrantha group.