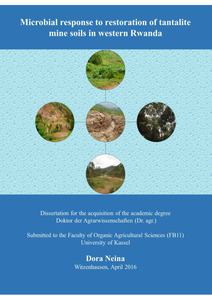 Microbial response to restoration of tantalite mine soils in western Rwanda

Artisanal columbite-tantalite (coltan) mining has had negative effects on the rural economy in the great Lakes region of Africa through labor deficits, degradation and loss of farmland, food insecurity, high cost of living, and reduced traditional export crop production alongside secondary impacts that remotely affect the quality of air, water, soil, plants, animals, and human wellbeing. The situation is multifaceted and calls for a holistic approach for short and long-term mitigation of such negative effects. This study focuses on the effects of mine land restoration on soil microbiological quality in the Gatumba Mining District of western Rwanda. Some coltan mine wastelands were afforested with pine and eucalyptus trees while farmers directly cultivated others due to land scarcity. Farmyard manure (FYM) is the sole fertilizer applied on the wastelands although it is insufficient to achieve the desired crop yields. Despite this, several multi-purpose plants such as Tithonia diversifolia, Markhamia lutea, and Canavalia brasiliensis thrive in the area and could supplement FYM. The potential for these “new” amendments to improve soil microbial properties, particularly in the tantalite mine soils was investigated. The specific objectives of the study were to: (a) evaluate the effects of land use on soil microbial indices of the tantalite mine soils; (b) investigate the restorative effects of organic amendments on a Technosol; and (c) estimate the short-term N and P supply potential of the soil amendments in the soils.
Fresh soils (0-20 cm) from an unmined native forest, two mine sites afforested with pine and eucalyptus forests (pine and eucalyptus Technosols), an arable land, and two cultivated Technosols (Kavumu and Kirengo Technosols) were analyzed for the physicochemical properties. Afterwards, a 28-day incubation (22oC) experiment was conducted followed by measurements of mineral N, soil microbial biomass C, N, P, and fungal ergosterol contents using standard methods. This was followed by a 12-week incubation study of the arable soil and the Kavumu Technosol amended with FYM, Canavalia and Tithonia biomass, and Markhamia leaf litter after which soil microbial properties were measured at 2, 8, and 12 weeks of incubation. Finally, two 4-week incubation experiments each were conducted in soils of the six sites to estimate (i) potential mineralizable N using a soil-sand mixture (1:1) amended with Canavalia and goat manure and (ii) P mineralization mixtures (1:1) of soil and anion exchange resins in bicarbonate form amended with Tithonia biomass and goat manure.
In study one, afforestation increased soil organic carbon and total N contents in the pine and eucalyptus Technosols by 34-40% and 28-30%, respectively of that in the native forest soil. Consequently, the microbial biomass and activity followed a similar trend where the cultivated Technosols were inferior to the afforested ones. The microbial indices of the mine soils were constrained by soil acidity, dithionite-extractable Al, and low P availability. In study two, the amendments substantially increased C and N mineralization, microbial properties compared with non-amended soils. Canavalia biomass increased CO2 efflux by 340%, net N mineralization by 30-140%, and microbial biomass C and N by 240-600% and 240-380% (P < 0.01), respectively after four weeks of incubation compared with the non-amended soils. Tithonia biomass increased ergosterol content by roughly 240%. The Kavumu Technosol showed a high potential for quick restoration of its soil quality due to its major responses to the measured biological parameters. In study three, Canavalia biomass gave the highest mineralizable N (130 µg g-1 soil, P < 0.01) in the Kavumu Technosol and the lowest in the native forest soil (-20 µg g-1 soil). Conversely, the mineralizable N of goat manure was negative in all soils ranging from -2.5 µg N g-1 to -7.7 µg N g-1 soil except the native forest soil. However, the immobilization of goat manure N in the “cultivated soils” was 30-70% lower than in the “forest soils” signifying an imminent recovery of the amended soils from N immobilization. The mineralization of goat manure P was three-fold that of Tithonia, constituting 61-71% of total P applied. Phosphorus mineralization slightly decreased after four weeks of incubation due to sulfate competition as reflected in a negative correlation, which was steeper in the Tithonia treatment.
In conclusion, each amendment used in this research played a unique role in C, N, and P mineralization and contributed substantially to microbial properties in the tantalite mine soils. Interestingly, the “N immobilizers” exhibited potentials for P release and soil organic carbon storage. Consequently, the combined use of the amendments in specific ratios, or co-composting prior to application is recommended to optimize nutrient release, microbial biomass dynamics and soil organic matter accrual. Transport of organic inputs seems more feasible for smallholder farmers who typically manage small field sizes. To reduce acidity in the soils, liming with wood ash was recommended to also improve P availability and enhance soil biological quality, even if it may only be possible on small areas. Further, afforestation with mixed-species of fast-growing eucalyptus and legume or indigenous tree species are suggested to restore tantalite mine wastelands. It is emphasized most of this research was conducted under controlled laboratory conditions, which exclude interaction with environmental variables. Also fine fractions of the amendments were used compared with the usual practice of applying a mixture of predominantly coarser fractions. Therefore, the biological dynamics reported in the studies here may not entirely reflect those of farmers’ field conditions.