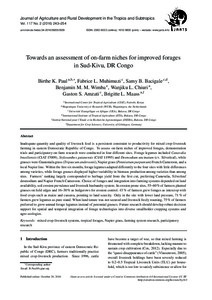 Towards an assessment of on-farm niches for improved forages in Sud-Kivu, DR Congo