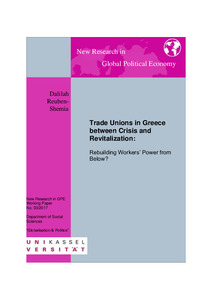 Trade Unions in Greece between Crisis and Revitalization: Rebuilding Workers´ Power from Below?

Long before the economic crisis in Greece, its labor movement had been already in a crisis itself. Indicators of the crisis of trade unions are seen in low union density in the private sector, lack of union representation at the workplace level and the representation gap considering young, female, immigrant and precarious workers. The trade union bureaucracy is dominated by public sector unions and led by party-factions. Inner cohesion of the labor movement is shattered by the organizational divisions of public and private sector workers, and the political fragmentation of the leadership at all levels mainly along party lines. Due to a union bureaucracy characterized by financial dependence on the state and a lack of autonomy from governmental or parliamentary parties, attempts to strategically rebuild trade unionism in the name of unity and effectiveness are not initiated from the top.
The central question of this paper concerns the ways in which unionists try to overcome the identified deficiencies of the labor bureaucracy. This issue is examined with the analytical guidance of the theoretical framework of the Power Resource Approach developed in Trade Union Revitalization Studies and content analysis of expert interviews in Greek for original data production. The used framework helps assessing the various forms of power of trade unions, including organizational, institutional, structural and societal power. In this way, their strengths and weaknesses can be identified and potential as well as applied strategies can be better understood.
Active shop-floor unionists seem to be the driving force of labor renewal in Greece, as they set autonomous and self-organized initiatives in motion with the pronounced objective of overcoming long-lasting deficiencies of unionism. Some democratize their unions, others even abolish the system of leadership by political parties. Some revitalize their unions through intervention in the leadership via militant factions, while others establish completely new autonomous unions organized in a federative manner. With these measures, they try to build structures and mobilize agency that will enhance the capacity and the willingness of workers to act, to participate and to develop power in their respective location in the market, as actors in society and as organization. Finally, they all try to coordinate and to organize struggles independently from the overall trade union bureaucracy, in order to achieve more cohesion autonomy and thus effectiveness in their actions.