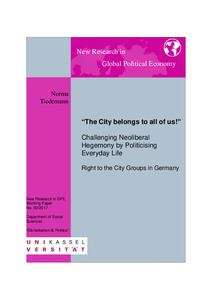 "The city belongs to all of us!"

Since the uprisings in Northern Africa and Arab regions, the global Occupy-movements and mass strikes in Southern Europe, protest and resistance have become again a much-debated topic. However, Germany seems to be rather untouched by such rebellious acts. Of course, it has not been subjected to the harsh austerity measures of “crisis management”, but neoliberal policies are for a long time at work here as well - widening the contradictions between social integrity, democracy and subjective wellbeing on the one side and a globalising (neoliberal) capitalism on the other. Cities and urban regions are the places where collective consumption and societal infrastructure concentrate physically. Market logics and the neoliberal valorisation imperative have modified these physical spaces. They left traces on the conditions of urban life in Germany, characterised by increasing inequality and precarity. Cities are also spaces of dense networks of communication, social interaction and political organisation. In many places, urban citizens come together to claim their Right to the City by opposing the commodification of housing, privatisation of space, exclusion and displacement of marginalised and low-income groups and are thus reacting towards the neoliberalising transformation of space. The question, which is central in this paper, is whether the Right to the City groups in Germany can be considered a relevant force in challenging neoliberal hegemonic formations. Concepts in reference to discourse-theoretical analyses of hegemony are developed to better understand the societal context and the protests themselves. Although the Right to the City might seem to delineate a narrow realm of contestation, the analysis shows that it goes beyond the urban scale. It presents an attractive narrative by articulating the promise of a universal social good. The RtC-project’s discourse is carried by a specific kind of political practice, which evolves around the acknowledgement of the importance of everyday life as a point of departure. In this way, RtC-groups challenge the rescaling of the state and might contribute to intensify possible ruptures of the neoliberal project.