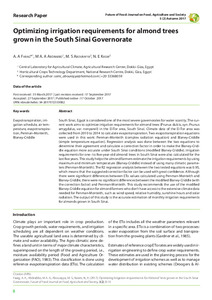 South Sinai, Egypt is considered one of the most severe governorates for water scarcity. The current work aims to optimize irrigation requirements for almond trees (Prunus dulcis, syn. Prunus amygdalus, var. nonpareil) in the El-Tor area, South Sinai. Climate data of the El-Tor area was collected from 2010 to 2014 to calculate evapotranspiration. Two evapotranspiration equations were used in this work: Penman-Monteith (complex radiation equation) and Blaney-Criddle (simple temperature equation). Regression analysis was done between the two equations to determine their agreement and calculate a correction factor in order to make the Blaney-Criddle equation more accurate under South Sinai conditions (modified Blaney-Criddle). Irrigation requirements for one- to five-year-old almond trees in South Sinai were also calculated for the last five years. This study helps the almond farmers estimate the irrigation requirements by using maximum and minimum temperature (Blaney-Criddle) instead of using many climatic parameters (Penman-Monteith). The R2 regression analysis between the two tested equations was 0.95, which means that the suggested correction factor can be used with great confidence. Although there were significant differences between ETo values calculated using Penman-Monteith and Blaney-Criddle, there were no significant differences between the modified Blaney-Criddle (with the correction factor) and Penman-Monteith. This study recommends the use of the modified Blaney-Criddle equation for almond farmers who don’t have access to the extensive climate data needed for Penman-Monteith, such as wind speed, relative humidity, sunshine hours and solar radiation. The output of this study is the accurate estimation of monthly irrigation requirements for almonds grown in South Sinai.