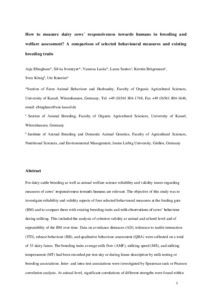 How to measure dairy cows´ responsiveness towards humans in breeding and welfare assessment? A comparison of selected behavioural measures and existing breeding traits

For dairy cattle breeding as well as animal welfare science reliability and validity issues regarding measures of cows’ responsiveness towards humans are relevant. The objective of this study was to investigate reliability and validity aspects of four selected behavioural measures at the feeding gate (BM) and to compare them with existing breeding traits and with observations of cows’ behaviour during milking. This included the analysis of criterion validity at animal and at herd level and of repeatability of the BM over time. Data on avoidance distances (AD), tolerance to tactile interaction (TTI), release behaviour (RB), and qualitative behaviour assessment (QBA) were collected on a total of 33 dairy farms. The breeding traits average milk flow (AMF), milking speed (MS), and milking temperament (MT) had been recorded per test-day or during linear description by milk testing or breeding associations. Inter- and intra-test associations were investigated by Spearman rank or Pearson correlation analysis. At animal level, significant correlations of different strengths were found within BM ranging from rs = 0.28 (p < 0.01, n = 1890) between AD and TTI to rs = 0.74 (p < 0.01, n = 582) between RB and QBA, and between MS and MT (rs = 0.62, p < 0.01, n = 269). No significant correlations were found between BM and breeding traits. For analyses at herd level, medians and percentages of certain categories were calculated and the average number of stepping (STEP) and kicking (KICK) per cow during milking was recorded. Between all BM closer correlations were found than at animal level. STEP correlated with KICK (rs = 0.80, p < 0.01, n = 24), while no further significant correlations were found between BM, STEP or KICK and breeding traits. For analysis of repeatability BM were applied repeatedly on three farms following a three-week interval. Correlations ranged from rs = 0.33 (p < 0.01, n = 67) for TTI to rs = 0.73 (p < 0.01, n = 23) for QBA. Apparently, behavioural measures at the feeding gate reflect partly similar and partly different aspects of cows’ responsiveness towards humans. The present study underlines methodological problems that exist with MT and MS, and questions the relationship between milkability, milking behaviour and responsiveness in the barn. The analyses show that AD, TTI, and RB appear to be vulnerable to short- or mid-term influences. Overall, QBA turned out to be a promising measure for breeding and welfare assessment.

The present study is part of the LOEWE research cluster “Animals – Humans – Society: Interdisciplinary Animal Studies” at the University of Kassel, Germany and has been funded by the Hessen State Ministry of Higher Education, Research and the Arts.