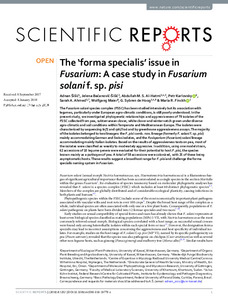 The Fusarium solani species complex (FSSC) has been studied intensively but its association with legumes, particularly under European agro-climatic conditions, is still poorly understood. In the present study, we investigated phylogenetic relationships and aggressiveness of 79 isolates of the FSSC collected from pea, subterranean clover, white clover and winter vetch grown under diverse agro-climatic and soil conditions within Temperate and Mediterranean Europe. The isolates were characterized by sequencing tef1 and rpb2 loci and by greenhouse aggressiveness assays. The majority of the isolates belonged to two lineages: the F. pisi comb. nov. lineage (formerly F. solani f. sp. pisi) mainly accommodating German and Swiss isolates, and the Fusisporium (Fusarium) solani lineage accommodating mainly Italian isolates. Based on the results of aggressiveness tests on pea, most of the isolates were classified as weakly to moderately aggressive. In addition, using one model strain, 62 accessions of 10 legume genera were evaluated for their potential to host F. pisi, the species known mainly as a pathogen of pea. A total of 58 accessions were colonized, with 25 of these being asymptomatic hosts. These results suggest a broad host range for F. pisi and challenge the forma specialis naming system in Fusarium.