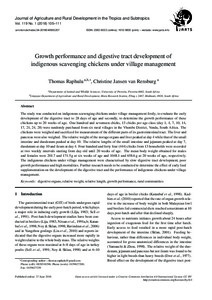 The study was conducted on indigenous scavenging chickens under village management firstly, to evaluate the early development of the digestive tract to 28 days of age and secondly, to determine the growth performance of these chickens up to 20 weeks of age. One hundred and seventeen chicks, 13 chicks per age class (day 1, 4, 7, 10, 14, 17, 21, 24, 28) were randomly purchased from six rural villages in the Vhembe District, Venda, South Africa. The chickens were weighed and sacrificed for measurement of the different parts of its gastrointestinal tract. The liver and pancreas were also weighed. The relative weight of the storage organs and liver peaked at day 4 while that of the small intestine and duodenum peaked at day 10. The relative lengths of the small intestine and jejunum peaked at day 7, duodenum at day 10 and ileum at day 4. Four hundred and forty four (444) chicks from 13 households were recorded at two weekly intervals starting from day old until 20 weeks of age. The mean body weight obtained for males and females were 201.7 and 171.5 g at six weeks of age and 1048.1 and 658.6 g at 20 weeks of age, respectively. The indigenous chickens under village management were characterised by slow digestive tract development, poor growth performance and high mortalities. Further research needs to be conducted to determine the effect of early feed supplementation on the development of the digestive tract and the performance of indigenous chickens under village management.