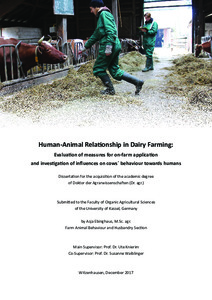 Human-Animal Relationship in Dairy Farming: Evaluation of measures for on-farm application and investigation of influences on cows´ behaviour towards humans

The objective of the present thesis was (1) to evaluate measures of the human-animal relationship (HAR) in dairy cows regarding their reliability, validity and practical applicability in animal welfare science and breeding. (2) Moreover, important human and farm influences on the cows´ behaviour towards humans in the barn and in the milking parlour should be identified via a cross-sectional investigation.
In the pilot phase, four behavioural measures applied in the barn have been identified as practical and reliable in terms of inter- and intra-observer agreement. These measures were the avoidance distance (AD) at the feeding place, the tolerance to tactile interaction (TTI), the behaviour during and after release from restraint (RB), and the qualitative behaviour assessment during a human-animal interaction (QBA). Thereupon, AD, TTI, RB, and QBA have been applied on 33 dairy farms in Middle and Northern Germany differing in their herd and management characteristics, including nine farms with automatic milking system (AMS). On three farms, assessments were repeated following a three-week interval in order to test intra-test consistency. In addition, data on existing breeding traits referring to cow behaviour during milking were in-cluded that were provided by VIT IT-solutions for animal production, Verden, Germany. On the farms with conventional milking parlours, the frequencies of stepping (STEP) and kicking (KICK) per cow and milking were recorded. With regard to potential influencing factors, stockpersons´ attitudes towards the animals were scored via questionnaire on all investigated farms. On the farms with milking parlour, tactile and acoustic interactions of the stockpersons with the cows were observed during milking. Altogether 34 further factors regarding human-animal contacts, herd, management and housing were recorded via interviews and during the farm visits.
Results of correlation analyses regarding the different behavioural measures applied in the barn suggest that they partly reflect different HAR-aspects: correlations at animal level ranged from rs = 0.28 (p < 0.01, n = 1890) between AD and TTI to rs = 0.74 (p < 0.01, n = 582) between RB and QBA. QBA showed the strongest correlations to the other measures, and may therefore reflect joint aspects the most. Also in terms of intra-test consistency, QBA turned out to be most promising (rs = 0.73, p < 0.01, n = 23). No satisfactory repeatability over time was obtained for the other measures. Between HAR measures applied in the barn and the cows´ behaviour during milking no associations were found - neither with the observed STEP and KICK, nor with the existing breeding traits. This suggests that the cows´ behaviour during milking reflects other factors than the cows´ fearfulness or attraction towards humans recorded in the barn.
For assessing HAR in the context of animal welfare science, QBA appears to be highly suitable. For breeding purposes, also AD could be taken into consideration: in comparison to QBA, the application of AD was considered easier and less training intensive. Moreover, within a collaborating breeding project a considerably higher heritability was estimated for AD.
Within the cross-sectional investigation of influences on the HAR, multivariable regression models were calculated at farm level following univariable pre-selection of factors. Regarding influences on the cows´ behaviour in the barn, models including data of all investigated farms and models including only data of farms with milking parlour were calculated, respectively. The latter considered also stockpersons´ interactions during milking. The outcome variables were the median of the AD (ADmedian) and of the QBA (QBAmedian), the percentage of cows that could be touched in the AD test (ADtouch) and that avoided the approaching human at 100 cm minimum (AD100), the percentage of stronger reacting cows (score > 2) in the TTI test (TTIhigh) and in the RB test (RBhigh). Regarding influences on the cows´ behaviour in the milking parlour, models were calculated for the average frequencies of STEP and KICK.
While stockpersons´ behaviour during milking was barely related to cows´ behaviour in the multivariable analysis, positive stockpersons´ attitudes towards cows were significantly (p < 0.05) associated with calmer herds in all test situations in the barn. Furthermore, different herd and management factors, such as herd size, frequency of human-animal contact, habituation of heifers to humans, manual feed provision, or selection for docility were related to individual variables of cows´ behaviour towards humans in the barn. Directly or indirectly all of them may be related to amount and quality of human-animal contacts. In contrast, less STEP was related to a negative stockpersons´ attitude. A management factor associated to less STEP was the concentrate provision during milking. KICK was only related to the type of milking parlour: cows kicked less in tandem parlours compared to fishbone parlours. Thus, while the recorded human factors had no or unexpected effects on cows´ behaviour in the milking parlour, results suggest that a positive attitude and frequent human-animal contact can contribute to calmer cows in different interactions with humans in the barn.

The project the present thesis is based on has been funded by the Hessen State Ministry of Higher Education, Research and the Arts as part of the LOEWE research cluster "Animals - Humans - Society: Interdisciplinary Animal Studies" at the University of Kassel, Germany.