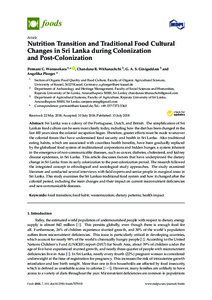 Sri Lanka was a colony of the Portuguese, Dutch, and British. The simplification of Sri Lankan food culture can be seen most clearly today, including how the diet has been changed in the last 400 years since the colonial occupation began. Therefore, greater efforts must be made to uncover the colonial forces that have undermined food security and health in Sri Lanka. Also traditional eating habits, which are associated with countless health benefits, have been gradually replaced by the globalized food system of multinational corporations and hidden hunger, a system inherent in the emergence of non-communicable diseases, such as cancer, diabetes, cholesterol, and kidney disease epidemics, in Sri Lanka. This article discusses factors that have underpinned the dietary change in Sri Lanka from its early colonization to the post-colonization period. The research followed the integrated concept in ethnological and sociological study approaches. The study examined literature and conducted several interviews with field experts and senior people in marginal areas in Sri Lanka. This study examines the Sri Lankan traditional food system and how it changed after the colonial period, including the main changes and their impact on current micronutrient deficiencies and non-communicable diseases.